In 2016, Bolivia saw its worst drought in nearly 30 years. While the city of La Paz faced an acute water shortage with no piped water in some parts, the agricultural sector was hit the hardest. According to The Agricultural Chamber of the East, the region suffered a loss of almost 50% of total produce. Animal carcasses lay scattered in plain sight in the valleys, where they had died looking for watering holes. 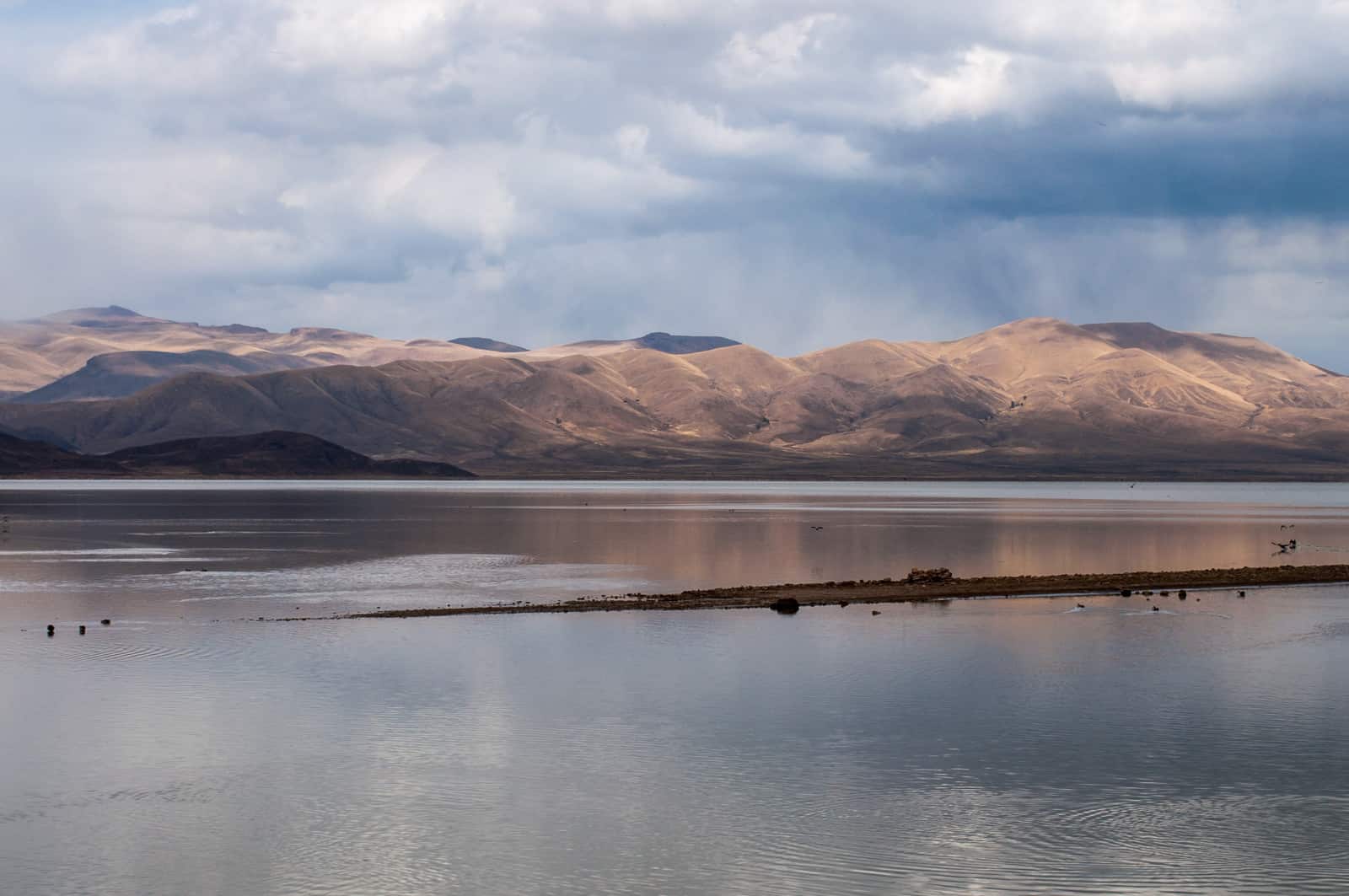 Lake Poopo (Bolivia) before it dried up © David Almeida I Flickr

One of the most dramatic results of this catastrophic drought was that Lake Poopo, (pronounced po-po) Bolivia’s second largest lake was drained of every drop of water. Located at a height of approximately 1127 meters, and covering an area of 1,000 square kilometers, what remains of it now resembles a desert more than a lake. This event forced the fishing community of Uru Uru, which depended on the lake, to either migrate to other lakes or look for alternate livelihood options.

Lake Poopo is located in the central South American Altiplano, one of the largest high plateaus in the world (Bolivia’s largest lake, Titicaca, is located in the north of the region). Due to its unique topography, the highland faces extreme climatic conditions, which are responsible for difficult lives as well as widespread poverty among the people who live there.

While Titicaca is over 100 meters deep, Poopo had a depth of less than three meters. Combined with a high rate of evapotranspiration, erratic rainfall, and limited flow of water from the Desaguadero River, Poopo was in a precarious position even during the best of times. Whatever little water flowed in from the river is further depleted by intensive irrigation activities at the south of Lake Titicaca before the water makes it way down to Poopo. 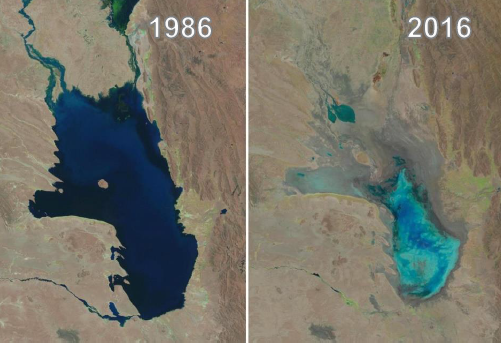 The lake’s existence had been threatened several times in the past. However, the 2016 drought was one of the most devastating ones. According to the Defense Ministry of Bolivia, early this year the lake started recovering after several days of heavy rain, restoring as much as 70% of the water. However, since the lake is a part of a very fragile ecosystem, there have been some irreversible changes to the flora and fauna in addition to the losses to the fishing communities living around the lake.

Claudia Canedo, a participant of the 2017 Young Scientists Summer Program (YSSP) at IIASA, is exploring the impact of droughts and the risk on agricultural production in the light of this event, after which Bolivia declared a state of water emergency. Canedo was born and raised in the city of La Paz and experienced water shortages while growing up close to the Altiplano. This motivated her to investigate a sustainable solution for water availability in the region. With the results of her study she is hoping to ensure that such a situation doesn’t arise again in the Altiplano – that other communities directly dependent on ecosystem services, like that of Lake Poopo, do not have to lose everything because of an extreme weather event.

For a region where more than half the population is dependent on agriculture for their livelihoods, droughts serve as a major setback to the national economy. “It is not just one factor that led to the drought, though. There were different factors that contributed to the drying up of the lake and also contribute to the agricultural distress,” she says.

“The southern Altiplano lies in an arid zone and receives low precipitation due to its proximity to the Atacama Desert. Poor soil quality (high saline content and lack of nutrients) makes it unsuitable for most crops, except quinoa and potato in some areas,” adds Canedo. Residents also lack the knowledge and the monetary resources to invest in newer technology, which could possibly lead to better water management. 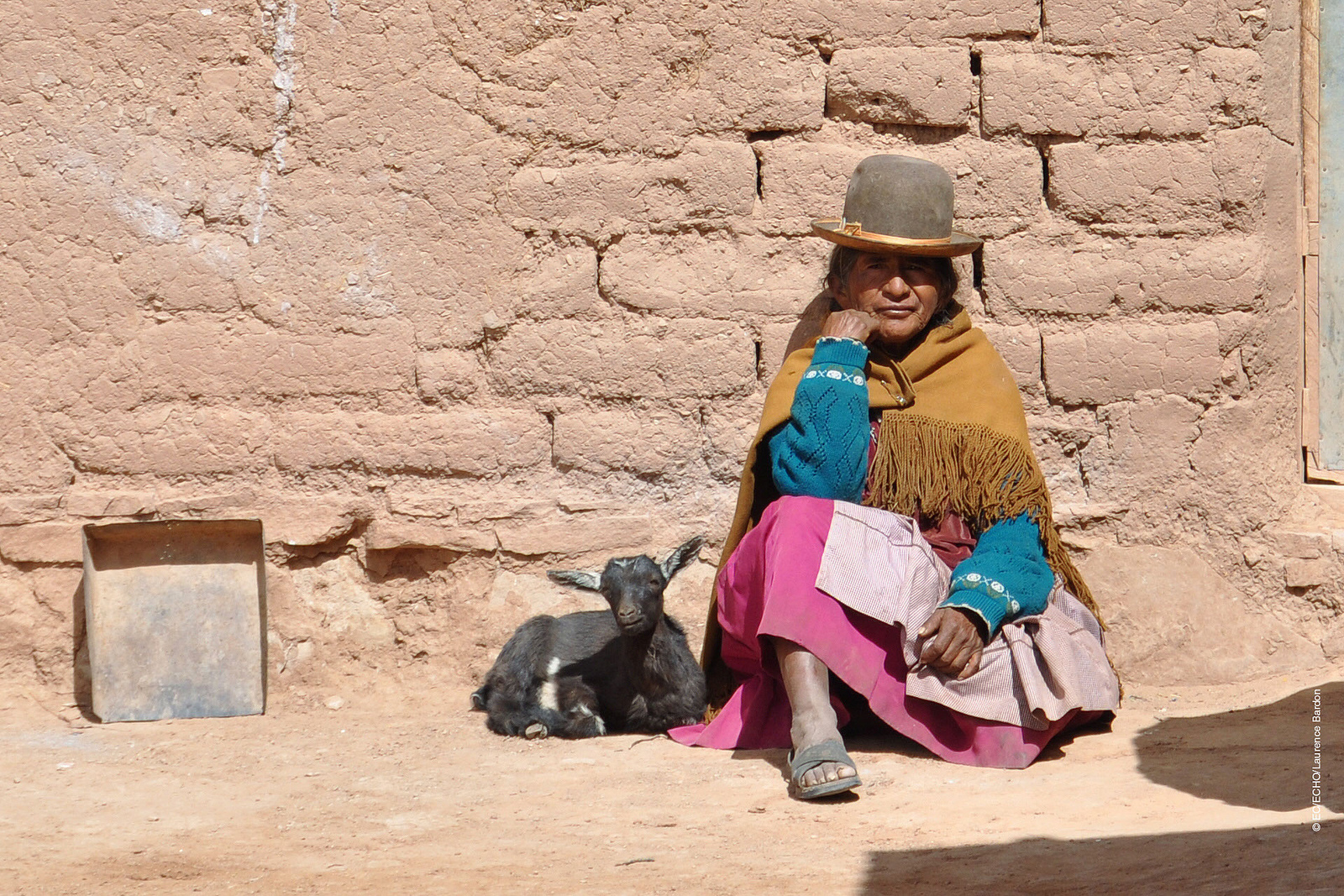 A woman from one of the drought affected communities in Bolivia © EU – Photo credits: EC/ECHO/Laurence Bardon I Flickr

One of the most critical factors in the recent drought was the El Nino- Southern Oscillation, the warming of the sea temperatures in the Pacific Ocean, which in turn carries the warmer oceanic winds and lowers the rate of precipitation in the highland leading to increased evapotranspiration. In 2015 and 2016, the losses due to this phenomenon were devastating for agriculture in the Altiplano, says Canedo.

In her quest to find solutions, the biggest challenge is the lack of recorded data from local weather stations for the past years. Although satellite data is available, it is too generic in nature to do a local analysis. Therefore combining ground and satellite data could enhance the present knowledge and provide consistent results of the climate and vegetation variability. If done successfully, Canedo hopes to identify a correlation between precipitation and vegetation. With this information, she can improve climate forecasting that could help the local people adapt to droughts powerful enough to turn their lives upside down.

With weather forecasts and early warning systems for extreme weather events like droughts, farmers would know what to expect and would be able to plant resilient varieties of crops. This might not earn them the same profits as in a normal year, but would not result in a failed crop. Claudia aims to come up with a drought index useful for drought monitoring and early warning, which will integrate short-term and long-term meteorological predictions.

Perhaps, in the future, with this newfound knowledge, the price for extreme weather events won’t be paid in terms of lost ecosystems like that of Lake Poopo, robbing people of their lives and livelihoods.

Claudia Canedo is a participant in the 2017 IIASA YSSP. She is pursuing a doctoral program in water resources engineering at Lund University, Sweden. She is interested in studying the hydrological and climatological conditions over small basins in the South American highlands. The aim of her research is to define water resources availability and find strategies for sustainable water management in the semi-arid region.