Preventing a water crisis at the US-Mexico border

North American leaders have recently announced initiatives on climate change, clean energy, the environment, and migration. But lacking from these discussions is a much-needed focus on the shared water resources that bind these countries. The Paso del Norte is a boundary region between the USA and Mexico where cooperation and joint action are needed to secure reliable and sustainable shared water resources. 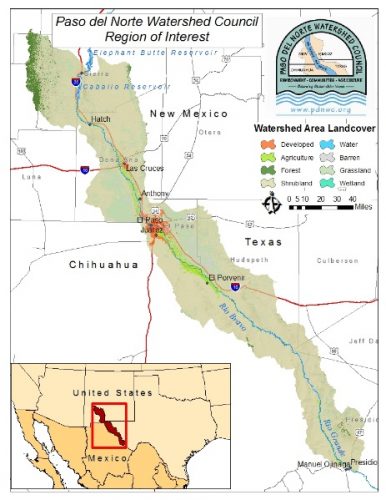 The Paso del Norte (PdN) emblematizes an important regional focus of attention. It is located right at the midpoint of the USA-Mexico border and the Rio Grande/Bravo basin. The region extends approximately 550 km along the Rio Grande from Elephant Butte Reservoir in southern New Mexico to the confluence of the Rio Conchos in Presidio County, Texas. With a population of 2.5 million, the Paso del Norte constitutes one of the largest international cross-border regions in the world and the largest boundary metropolitan area between three states (New Mexico, Texas and Chihuahua), and two countries (the USA and Mexico).

Water is scarce in the channelized Paso del Norte. The Paso del Norte is one of the most irrigation intensive and environmentally damaged regions in the Rio Grande Basin. With an average rainfall of only about 150mm and increasing evaporation rates, crops such as maize, alfalfa, pecans, chili, and cotton are growing in this semi-arid region. Water competition is intensifying due to constant agricultural water use and growing urban water demands. Climate change is expected to reduce water availability, affect the quality of aquatic environments, and accentuate sustained drought and water scarcity.

Water scarcity will greatly worsen in the Paso del Norte region if current water policies and regulations persist and climate projections prove correct. Without new international cooperation, cross-border regions like the Paso del Norte, which includes the major cities of Las Cruces, El Paso, and Ciudad Juarez, will face a water resource crisis, as climate change and population growth place greater pressure on an already precarious system. This is why laws and regulations governing water in the Paso del Norte need to be adapted to this reality.

If we want to prevent a water crisis in this binational region, we should start working together to build institutional resilience by means of enabling regional openness and flexibility of the existing ensemble of rules and policy processes. Creating resilient water institutions in the Paso del Norte region will help the design of an ad-hoc regional basin management approach, featuring increased dialogue and coordination among all relevant parties aiming to secure water in the region. A coordinated and sustained binational effort – from the states and non-state actors- is of paramount importance to find solutions to shared problems and adapt the way water resources are being managed across the border.

The Paso del Norte Task Force, created in 1998, represents the most appropriate regional water stakeholder group with a high potential to advance sustainable water management in the region—but it needs to be revitalized. A new injection of funds could prevent this group from falling silent. . Through a collaborative effort, the Paso del Norte Task Force is in the best position to make the most effective use of the existing technical capacities and water infrastructures to adapt the management of water in the region. Its reactivation is essential to prepare an ad hoc water management plan for the region, and better respond to the challenge of securing adequate water supplies.