Not only have climate scientists agreed that humans are contributing to climate change, but recent evidence also points out that the rate of warming is happening much faster now than it ever has before.  This is why, at the UN Climate Conference in Paris this month, world leaders sought to reach a new international agreement on climate change, essentially to keep global warming below 2°C (or 3.6°F). Rising temperatures pose threats on food and water security, infrastructure, ecosystems and health and, as a previous blog on this site shows, increases the risk of conflict. With an upsurge in the frequency and intensity of extreme weather events and the potential for rapid sea level rise, both mitigating human-related exacerbation of climate change, and adapting to its devastating effects are key priorities. This is where education comes in.

Both mitigation and adaptation require technological, institutional and behavioral responses. Correspondingly, the Intergovernmental Panel on Climate Change highlighted the value of a mix of strategies to protect the planet, which combine policies with incentive-based approaches encompassing all actors from the individual citizen, to national governments and international communities. Because, while national and sub-national climate action plans are fundamental, changing individual behaviour also lies at the heart of responses to climate change.

At the individual level, barriers to the adoption of mitigation and adaptation measures include a lack of awareness and understanding of climate change risk, doubt about efficacy of one’s action, lack of knowledge on how to change behavior and lack of financial resources to implement changes. Accordingly, there are many sound reasons to assume that different education strategies can help overcome these barriers both in direct and indirect manners.

First, directly formal schooling is a primary way individuals acquire knowledge, skills, and competencies that can influence their mitigation practices and adaptation efforts. Schooling provides a unique environment to engage in cognitive activities such as learning to read, write, and use numbers. 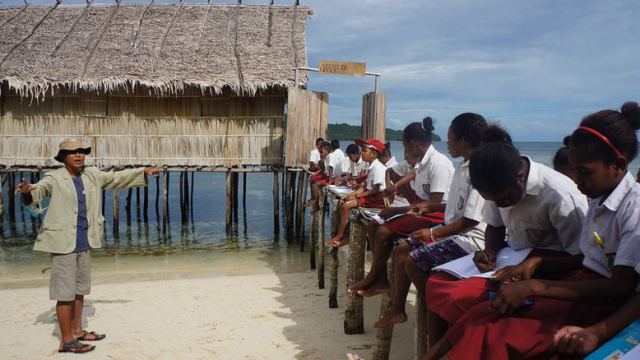 Furthermore, education enhances the acquisition of knowledge, values and priorities as well as the capacity to plan for the future and allocate resources efficiently. Schooling can help individuals adopt, for instance, disaster preparedness measures by improving their knowledge of the relationship between preparedness and disaster risk reduction. Moreover, educated individuals may have better understanding of what measures to undertake. Recent evidence also shows that education can change time preferences such that more educated people are more patient, more goal-oriented and thus make more investments (e.g., financial, health or education investments) for their future. Such forward-looking attitudes can influence adoption of mitigation actions or adaptation measures where benefits may only be expected by future generations.

Apart from the direct impacts, education may indirectly reduce vulnerability or promote mitigation actions through other means. Firstly, education improves socio-economic status as education generally increases earnings. This allows individuals to have command over resources such as purchasing costly disaster insurance, living in low risk areas and quality housing, installing renewable energy sources at home or being willing to pay carbon taxes.

Secondly, many empirical studies have shown that people with more years of education have access to more sources and types of information. The level of education is not only highly correlated with access to weather forecasts and warnings but the more educated are better able to understand complex environmental issues such as climate change than less educated counterparts.

Knowing where to get information on how to reduce emissions or what adaptations to take allows individuals to change their behaviour appropriately. Indeed, there is evidence that good understanding of climate change or environmental knowledge are associated with climate change mitigation behaviours such as consumption of climate-friendly food, owning fuel-efficient vehicles and conservation behaviour.

In addition, more educated individuals also have higher social capital. A perception of risk and motivations to take preventive action are more likely to be communicated via social networks and through social activities. Evidently, through increasing socio-economic resources, facilitating access to information and enhancing social capital, education can promote and foster sustainable lifestyle and consumption.

Despite these potential benefits on climate action, education has not yet been sufficiently prioritized as a fundamental instrument to fight climate change. Recently researchers at the Wittgenstein Centre for Demography and Global Human Capital based in Vienna have produced convincing empirical evidence that education, particularly (at least) secondary school, is important for reducing vulnerability to climate change. By showing that education enhances disaster responses, reduces loss and damage and facilitates recovery after disasters, it was argued that part of Green Climate Fund should be spent to promote universal secondary education.

Likewise, education has also been shown to be an important determinant of sustainable lifestyle and consumption. As another blog on this site has shown recently, individuals with a higher level of education are more likely to be concerned about climate change and consequently more likely to take actions to reduce greenhouse gas (GHG) emissions. The Figure below clearly demonstrates how the number of mitigation actions increases with years of schooling. Not only do the highly educated carry out more mitigating actions, education also interacts with concern about climate change. In other words, given the same level of concern about climate change, the highly educated are doing even more to reduce GHG emissions than those with lower education.

Figure 1: Number of mitigation actions taken by years of schooling and concern about climate change 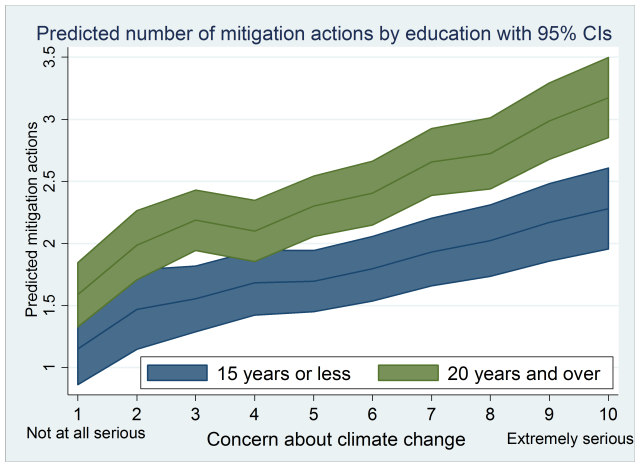 Responding to the challenges of climate change is going to require action on multiple fronts. Ignoring the impacts of education on climate change is no longer an option. Promoting universal secondary education should be given a high priority on the agenda as we look forward past last week’s Paris meeting.