Fulfilling the Enlightenment dream: Arts and science complementing each other

By Gloria Benedikt, IIASA Associate for Science and Arts

“For the real human story, history must comprise both the biological and the cultural,” wrote biologist Edward O. Wilson in his 2014 book The Meaning of Human Existence. ”The convergence between those two great branches of learning (sciences and humanities) will matter hugely when enough people have thought its potential through”.

This elegantly summarizes why I find myself at IIASA. I’ve been splitting my life between the arts (working as a professional dancer) and academia (studying at Harvard University). Over time I started to make connections between seemingly opposing worlds: arts and science. Now my challenge as IIASA Associate for Science and Arts is to help bridge them.

Why is this important, and why now? Because the way the world is run assumes that human beings act rationally and that economic (material) well-being in itself is key in solving all major issues afflicting our world. We have focused on the biological and neglected the cultural; we assumed that satisfying basic needs to keep bodies functioning will keep people alive. In short, we looked at the body and overlooked the soul. Or as prominent Czech Economist Tomáš Sedláček framed it, “There were huge advances that were brought upon us thanks to science and also thanks to economics, but now I feel we are in a time where we see the limits of it. In the beginning, there was no analytics, just ethics. Today there is only analytics and no ethics.” 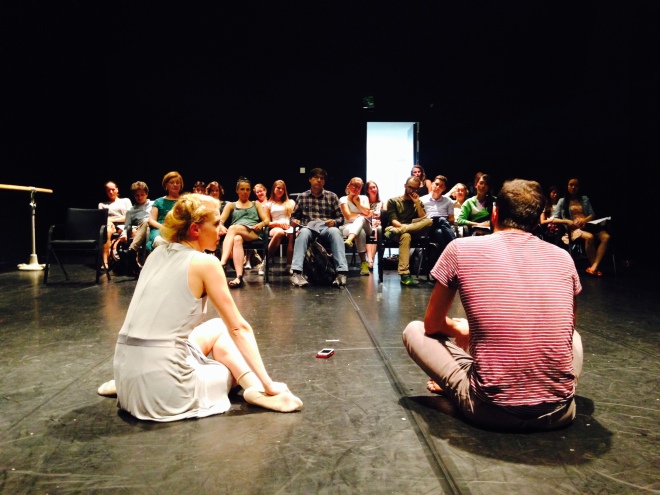 Gloria Benedikt (left) and Hussein Khadour (right) answer questions from young scientists at a dress rehearsal of their new performance, InDignity, at the Festspielhaus St. Poelten

There was a time when humanity was already closer in finding a balance between the two. It was called the Enlightenment. “The Enlightenment quest,” Wilson observed, “was driven by the belief that human beings can know all that needs to be known, and in knowing understand, and in understanding gain the power to choose more wisely than ever before.”

Then, for the next two centuries and to the present day, science and humanities went their own way. Complex reasons briefly summarized: albeit making good progress, scientists were nowhere close to meeting expectations and artists sought meaning in other more private venues.

Is there any value in resuming this quest of connecting arts and science now? Wilson argues that the answer is yes, “because enough is known today to make it more attainable than during its first flowering.” And yes, because the solutions of so many problems in modern life will depend on solutions for the clash of competing religions, the revival of moral reasoning and on adequate foundations of environmentalism.

So, how can this work in practice? For starters we should be aware that there is a common foundation. Despite science and humanities being fundamentally different from each other in what they say and do, they are complementary to each other in origin, as they arise from the same creative process in the human brain. But there is more. “Good” science is  data driven. Scientists are trained to present their findings in a neutral way. A scientist appealing to emotion is likely to be considered unprofessional.

Meanwhile, artists are masters of metaphors and of appealing to emotion. At the same time, the majority religiously avoids being explicit. “Good” art is not dogmatic. We prefer to leave it up to our audiences to find meaning for themselves.

In the past 150 years, we have seen that if we push our noble pursuits to the extreme, we risk losing our purpose because we lose our link to society. If people don’t understand how scientific findings matter to them and if artists are too scared or simply too wound up in their own world, and thus fail to articulate, our work falls short of its ultimate purpose: to serve society by revealing truths in the world around us so that people can make better-informed decisions on how to go about their work and lives and shape the direction of our planet and the over 7 billion people populating it.

Arts and science need to be free – in 2015, I believe this freedom lies in the ability to present our findings clearly and independently. This quest, coupled with a new sense of responsibility to communicate, is what can and should bring scientists and artists together in the coming years and decades. I, for one, am excited that IIASA has opened its doors for us to join hands so we can create a sustainable future together and perhaps fulfill Wilson’s vision of a second enlightenment along the way.

Please note: I use the terms ‘humanities’ and ‘arts’ interchangeably here. However the term humanities is of course technically broader, as it includes not only the creative arts, but also political theory & philosophy.